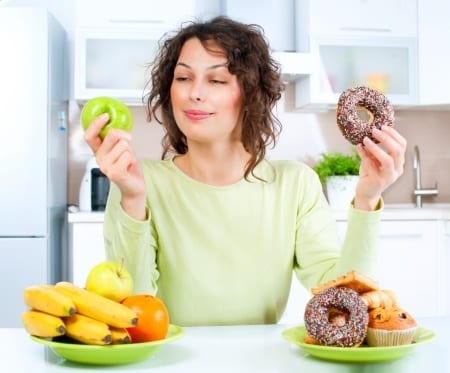 Man of course does not need by bread alone but then life is too short to give up the pleasures of binging once in a while. After all, you live only once. Keeping this cue in mind, most of us have wined and dined to our hearts’ content in the festive season with the gormandizing streak going on till the 1st week of the New Year. The puppy fat now sitting pretty around your waist has put you on a dieting overdrive as you’ve made a commitment to yourself that you’ll fulfill your weight loss resolution.

But fortunately for you, cutting down the flab in order to lose fat can happen smoothly without your having to give up those yummy and mouthwatering delicacies. The trick lies in making minor tweaks and adjustments in your eating habits instead of overhauling the entire menu as well as following some healthy practices. The following tips or guidelines will not only let you tuck into your favorite fares but also adhere to your weight loss program.

Eat Small Portions Instead of Gorging

A full-course menu comprising lip-smacking fares always looks tempting. Not having your fill of all the dishes laid out will leave you with the feeling that you missed out on a sumptuous spread. But then you cannot have best of both the worlds-stuff yourself to the brim and hold on to your weight. Gluttonizing can happen only at the cost of your becoming obese. You’d only be fooling yourself if you think that you can’t enjoy a dish if you don’t overeat. The best way out would be to settle for small portions instead of going for large helpings.

Several studies have revealed that people tended to consume less if the plate’s color was in sharp contrast with the color of the food or food items served. Most of us, more often than not, are not able to make out the size of portions we should be taking if the colors matched. Nutritionists and dietitians recommend eating out of blue-colored plates for a perfect contrast as a majority of foods do not have a bluish hue.

Say No to Commercials

As per studies issued in ‘Health Psychology’ there was a close interrelation between viewing cookery shows and snacking. Couch potatoes preferring to view culinary or cooking serials and advertisements were more indisposed to bingeing. Therefore, the solution lies in saying a strict ‘no’ to TV commercials and shows relating to food.

Healthy Foods Should be More Accessible

Most people don’t take notice of the fact that they are prone to consuming more of those foods that they first notice when they open the refrigerator. So, if you want to give your weight-loss goal a shot in the arm, keep apples or oranges in the front instead of that candy bowl.

Junk foods should be less visible

Visible presence of junk foods induces you to be gluttonous. So, the less you see these processed foods, the better. Store your salted nuts, pretzels, and mint chips in opaque containers on the topmost shelves in your kitchen.

Chewing your morsels down thoroughly does not take too much effort and is always preferable to gulping. Chewing helps in breaking down the food thereby promoting metabolism.